We’re excited to welcome Thomas Mariadason as CPE’s interim executive director.  Learn more about him below.

Eighteen years ago or so, I walked into a third-floor office above a salon and saree shop in Jackson Heights, Queens. It was my first day volunteering with the Youth Power program at DRUM, a small base-building organization of immigrants resisting the xenophobic backlash and imperialist expansion of the “war on terror.” Sitting among high school students wracked by uncertainty about their future in this country, I learned the essentials of community organizing and movement building: the fundamental importance of political education; the centrality of developing leadership among the most affected; and the process of risk, experimentation, and struggle that binds people together in solidarity. I also learned that if you’re not careful, youth organizers will give you strange nicknames and/or make you into an office meme. (Don’t ask.) 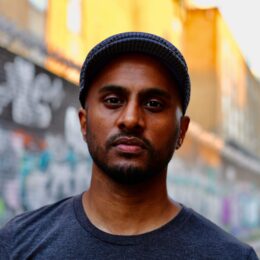 Since then, I’ve sat with comrades in countless community circles sketching out visions, power analyses, and legal and political strategies across reams of butcher paper and post-it notes. (So many post-it notes.) Some of my work has remained squarely in the realm of organizing and political activism, like working with squatters and houseless advocates to secure homes for the displaced during Occupy, or, more recently, supporting Tamil self-determination in Sri Lanka with others in the diaspora. But the crux of my work in movements has been as a lawyer. After graduating from CUNY Law—one of the few training grounds for progressive attorneys in the country—I became a movement lawyer. (Translation: a leftist who joins the legal profession and still wants street cred). I supported campaigns to get cops out of schools, implement restorative justice alternatives, and end police terror in Black and Brown communities. I built relationships with organizers in New Orleans and Lake Charles, Miami and Pinellas County, Richmond and Alexandria, and so many other places in between. While each community offered a unique context, the same lessons I learned at DRUM were always applicable: good campaigns were informed by good strategy, and good strategy was rooted in accessible and regular political education.

Just three years ago, I came to the Bay to join Asian Law Caucus as its Deputy Director. I finally saw up close the Bay’s rich culture of organizing, and the formations and institutions that anchor its essential history in America’s leftist movements. (Still can’t say ‘hella’ though.) The Center for Political Education is among those key pillars, and I’m humbled to carry on Rachel’s work as the new interim executive director. I plan to benefit from her continued guidance and support on the community advisory board and look forward to working with Jazmín, our other advisory board members, and all of you in our larger CPE family to shepherd the Center through this new and important time in its history.

With love and solidarity,