Key Lessons for Building Power during the Elections

With the last days of the elections upon us, leftists and progressives have been getting ourselves ready for the immediate task ahead: defeating white-supremacist authoritarianism while strengthening our own forces. Some of us are leading voter turnout efforts locally and in swing states, others are getting ready to keep our communities safe from intimidation at the ballot box, and some are continuing to do work outside of the electoral arena, whether in the form of community organizing, mutual aid, or campaigning. Almost all of us are busily drawing up post-elections plans while anticipating different scenarios that could unfold on November 3, and beyond. 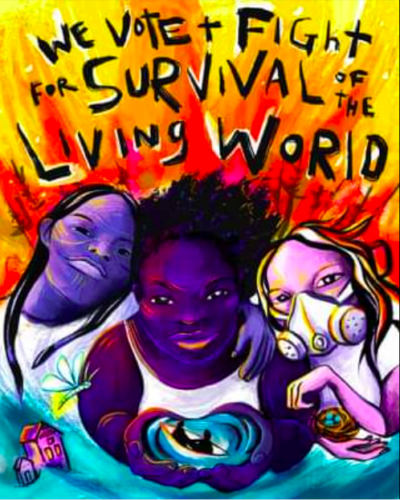 The coming weeks and months will bring a lot of challenges, and our ability to confront them while building power for the long haul will depend on how well we reflect on past struggles, assess the material conditions, and develop long-term strategy for the protracted fight ahead of us. Regardless of the outcome of the elections, we will still need to contend with three intertwined global crises: a deepening economic crisis, intensifying climate catastrophe, and a deadly pandemic nowhere near contained. So, what lessons can we draw from this electoral cycle that can help us build power at the scale that we need to contend with these threats?

Elections teach us that we need to struggle for power before it can be won.

Whether our organizations do electoral work or not, we can all draw lessons from elections about the nature of power. At its most basic, power, is, in the words of Martin Luther King Jr., “the ability to achieve purpose” and “the strength required to bring about social, political, or economic changes.” Determining how resources are produced and allocated in our communities requires power. Being in rightful relationship with the land and protecting it from violent extraction and pollution requires power. Protecting our homelands from occupation, warfare, and displacement requires power. Simply put, we need power to build the kind of anti-capitalist and anti-colonial future we all need.

The electoral arena is one of the key sites where the fight for power happens. An electoral victory for one side translates into securing access to key instruments of the state to get them more of what they need. At the local and state level it means having power to decide what services get funding, to make policy changes that are beneficial to our communities, to overturn bad policies, and to put people in key positions of power who have a proven record of staying accountable to our movements and communities. At the federal level, the power to do good or harm gets intensified. As a case in point, just look at how swiftly the right has used the levers of state power to tear down environmental protections, gut the asylum system, intensify its attacks against organized labor, stack the Supreme Court in its favor, and rollback basic protections for communities of color, the working class, and queer and trans people — all while enriching and empowering its key allies. If we want the power to move resources towards our communities at the scale that we need, then we can’t cede this crucial part of the political terrain to authoritarians or neoliberals. There’s a lot to learn from leftist organizers who are stepping into the contradictions of the moment to take power back for our people.

Elections teach us the importance of studying the balance of forces in any given fight.

Engaging in the fight for power means that we need to study the forces we’re up against and pose the following questions: Who are the main camps competing for power and what are their constituent factions? How stable or unstable are these alliances? What do these actors have the power to move? What are their strengths and weaknesses in relation to ours? How should leftists relate to these forces as we also try to gain some ground? If we don’t understand the balance of forces in a given fight, it’s difficult to impossible to develop an effective strategy to build power. For example, we might overestimate our influence and fail to form crucial alliances needed to make an impact, or we could miss openings where we could be making bold interventions that can lead to powerful change. Without a solid framework for thinking about elections (or politics more broadly), It’s easy to get caught up in focusing on individual characters and letting our personal predilections and aversions take center stage, while missing the larger contestation for power shaping the political terrain.

Elections teach us that a long-term strategy pays off.

Looking at the big picture helps us understand how we got here. We come to understand that Trump’s administration is not an inevitable of outgrowth of this political system, but it’s the result of long-term organizing by a coalition of right-wing forces that’s been building power over the past 45 years both in and out of the electoral terrain. From school boards to the Supreme Court, this right-wing bloc has been placing their people in key positions of power across the board. This group is not a monolith, but the glue that binds them together is a white supremacist, authoritarian ideology and a commitment to roll back all the gains that have been made by working-class, Black, Indigenous, and People of color movements. They’re doing this by actively seeking to dismantle democratic institutions and processes.

Elections teach us that the building blocks of democracy have been laid by our movements, and we are the best situated to bring true democracy into fruition.

Trump has sent out strong signals that he will not respect the results of the elections should he lose. Due to the fact that a lot of people will be casting their votes through mail-in ballots, we can anticipate that the current administration will try to disrupt the vote count or reject the results outright. We will need to come out in large numbers to protect the democratic space that our movements have been able to win. This includes defending people’s right to vote safely through programs like Election Defenders and taking action post-elections with movements like The Frontline to ensure that every vote is counted, and that the results of the election are respected in the face of possible litigation or flat-out rejection. But the fight for democratic space is also much more than that — it’s also about bringing democracy to life through the creation of new practices, capacities, and forms of organization that support liberation and self-determination for our communities.

Left organizing and the Black Radical tradition provide a deep well of knowledge and inspiration for our movements today. From the Black-led construction of a multiracial democratic society in the U.S. South during the Reconstruction project (from which we have inherited free and publicly funded education); to the organizing by Fanny Lou Hamer and the Student Nonviolent Coordinating Committee (SNCC) to win and protect the franchise for Black southerners in the face of white supremacist terror campaigns against them, to the recent triumph by Bolivia’s Indigenous-led Movement Toward Socialism (MAS) over the US-backed fascist regime, to the recent decision by the people of Chile to rewrite the country’s constitution put into place by another US-backed authoritarian government — all these efforts and many more, led precisely by some of the most oppressed and politically marginalized actors, have key lessons for us. And make no mistake —none of these struggles have been purely electoral; they’ve also involved direct action, uprisings, militant long-term organizing, and alternative economic experiments. We would be wise to learn from these movements in the turbulent weeks and months ahead.

As we move into the next phase of the struggle, here are some of the questions our movements need to answer:

These are all big questions that none of us can answer alone but can only come to through a process of study, principled struggle, and bold experimentation. In the midst of intense repression and attacks against our communities, our movements have built significant strength and have the potential to grow even more cohesive, powerful, and effective. When our movements are disconnected, or when we’re not connected to an organization, it’s easy to feel like our political futures are at the mercy of forces larger than ourselves every election cycle. As practitioners and students of social change, let’s take seriously the lessons that elections teach about power so that through effective organizing and strategic thinking, its our people that set and steer the course towards our liberated futures.

Thanks to Rachel Herzing for input on this piece.