Center for Political Education (CPE) is a resource for political organizations on the left, progressive social movements, the working class and people of color. CPE’s approach is non-sectarian, democratic, and committed to a critical analysis of local, regional and global politics. We believe that movements are strongest when their organizing and activism are grounded in historical knowledge, strong theory and rigorous analysis. 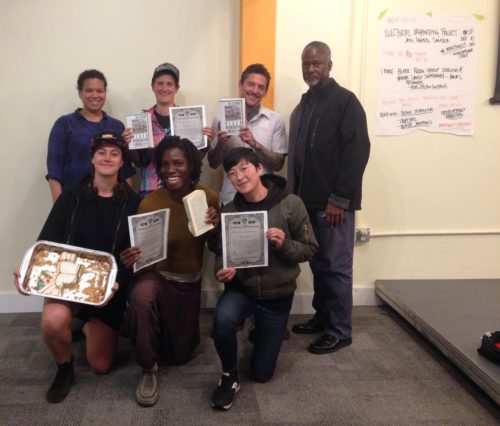 Center for Political Education began in 1998 when a group of established community activists, writers and teachers engaged in a series of dialogues. They analyzed left movements and the future of movement-building in the U.S., particularly the Bay Area. The needs were clear: organizers did not have enough time or space nor adequate tools to analyze the political, economic and social trends impacting their work. These gaps in turn made it difficult for organizers and activists to develop strong, clear political strategies that would result in systemic change and fundamental shifts in power.

These dialogues confirmed the need for a center dedicated to building strong movements and a strong left through education, analysis, theory, dialogue, and activism. From these roots CPE was born.

CPE is a fiscally sponsored project of the Kendra Alexander Foundation (KAF) and is supported by grants from KAF and other foundations, fee for service income, and individual supporters.

We are committed to providing a left space and perspective for organizers and activists by hosting classes, educational forums, study groups, presentations, film series and dialogues. To date CPE has hosted nearly 650 such events both independently and in collaboration with others.

Center for Political Education is dedicated to helping build the movement and expand and unite the left through education, analysis, dialogue and action. Our political approach is non-sectarian, democratic, and committed to a critical analysis of local, regional and global politics.

We are a resource for political organizations on the left, progressive movements, the working class and people of color. We believe that political conditions call for organizing and movement building, and that theory and ideas are important tools for movement building. We are committed to providing a left space and perspective.

Our collective thought is diverse and comes from a variety of political schools. We look to various revolutionary thinkers and organizers for inspiration and critical review.

Center for Political Education is internationalist, anti-capitalist, and anti-imperialist. We believe in international solidarity and use our educational forums as one way to build support for liberation, labor, racial justice, environmental justice and related political struggles throughout the world. We view the struggles for gender equality and against racism, sexism, homophobia, and heterosexism as integral to all forms of political struggle.