(audio) or as a VIDEO PLAYLIST

The goal of the first class (in addition to the overall getting to know each other and overview of logistics and approach) was to understand broadly the global political situation of the ‘68 moment. We hoped to examine some of the ways this period was marked by pitched contestation over power on a global scale, and to highlight some of the protagonists and antagonists central to that history (remembering that our analysis of this period is not limited only to the 12 months of the year 1968). Here are a few key points we thought were important to draw from the first class. 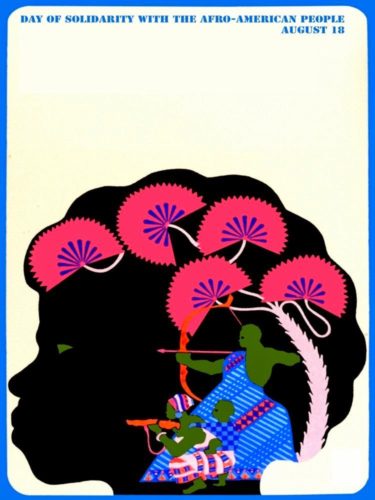 The Third World was a leading force:
Some of the most forceful challenges to capitalism, white supremacy, colonialism, and imperialism where being waged by movements in the Third World (what is often now called the Global South). Third Worldism was a dominant, international political idea, that peoples-in-struggle in the movements and states of Latin America, Asia, and Africa (along with their diasporas and or indigenous counterparts in North America and Europe)–bound by a common experience of racism, colonialism, imperialism, and a value on self-determination– could and would make history determined by their own efforts, as opposed to being subordinates or appendages of the US or Soviet “superpowers”.

1968 was a period of worldwide revolution:
Related to the “crisis of hegemony” described above, around the world and in a relatively intensive period of time, social forces made profound, game-changing impacts on the previously dominant order (even the counter-revolution had to create radically new modes of domination and exploitation in order to reassert the rule of capital and imperialism). In short, the world as we know it was changed forever in this period.

From “One Question” (a blog series asking a range of people to weigh in on a single question): How should we remember 1968?  (text)

A timeline of some events from 1968 compiled by CPE advisor, Max Elbaum (text)

“Towards a Third Cinema” by Fernando Solanas and Octavio Getino (text)

“Havana” by Vijay Prashad from The Darker Nations: A People’s History of the Third World (text)

Interview with Anne Garland Mahler, author of From the Tricontinental to the Global South: Race, Radicalism, and Transnational Solidarity. (audio)

Freedom Archives’ COINTELPRO 101 and Symbols of Resistance: A Tribute to the Martyrs of the Chican@ Movement (video)

KEYWORDS
Here are some brief working definitions/explanations of terms related to this week’s class.

Colonialism:  The occupation and military, political, social control, domination, and exploitation of a land and people, by a state or group of other people.

Imperialism*:  A development of capitalism wherein: economic life is dominated by “finance capitalism” and the extreme concentration of capitalist monopolies. The export of capital (as opposed to simply goods) from the centers of monopoly capital (United States, Western Europe, etc.) to other parts of the world is very important—in order to create and exploit new resources, labor, and markets the world becomes increasingly “divided up” into markets, spheres of influence, etc. by capitalist monopolies and states along with military power, the division and control of land, labor, and economies by concentrated monopolies and leading capitalist states and, is also managed by exerting political and cultural hegemony over subordinated regions, states, and peoples.

*This definition draws heavily from V.I. Lenin and Edward Said

Balance of Forces:  The relative strength and state of stability or instability between social, political, and or military forces as they exert, expand, defend, or seek to gain power. An assessment of the balance of forces is a useful analytic tool for understanding historical events and for developing strategy.