Food Crisis: From the Global Food System to Local Food Justice, with:

While economic crisis has dominated recent news headlines, the lack of access to healthy, affordable food for the world’s billions of poor and working people, and the political economy of food, continues to define struggles from Oakland, to Egypt, from the Philippines to Mexico, India and Haiti.  Join CPE and the Movement Generation Justice and Ecology Project for an exciting panel discussion with Raj Patel and Brahm Ahmadi.

a Fellow at the Institute of Food and Development Policy: Food First.  He is the author of the recently released book, Stuffed and Starved: The Hidden Battle for the World Food System, which focuses attention on the irony of the current world food situation — where the imbalance of world resources has created an epidemic of obesity in some parts of the world while millions in the Global South endure starvation.  Though he has worked for the World Bank, WTO, and the UN, he’s also been tear-gassed on four continents protesting them.

Brahm Ahmadi is the Executive Director of People’s Grocery in Oakland, a community-based organization in West Oakland the develops creative solutions to the health problems that stem from a lack of access to and knowledge about 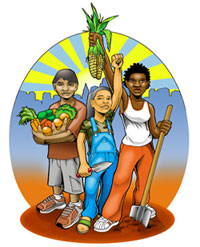 healthy, fresh food.  People’s Grocery mission is to build a local food system that improves the health and economy of the West Oakland community.  Brahm is also active in worker-owned cooperative business development and organizing for economic democracy.