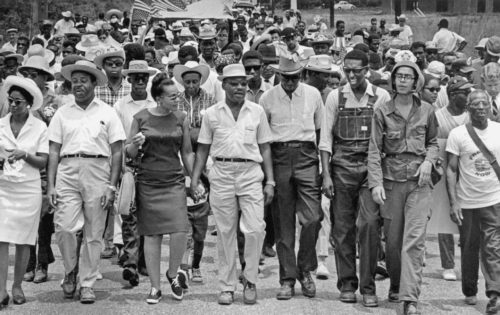 CPE co-facilitated a teach-in on MLK’s radical legacy (January 14, 2018) with Haiti Action Committee as part of Anti Police-Terror Project‘s call for actions to #ReclaimMLK in the Bay Area. CPE created a study guide based on the outline for the teach-in.

Goal: To build toward a collective understanding of Martin Luther King, Jr. as leader whose ideas and political organizing on issues of white supremacy, political power, capitalism, and US imperialism cumulatively and increasingly called for a radical restructuring of the economic and social systems in the US.

Optional Reading:
Consider the following as you study the above:

Studying as a Group:

Never forget that freedom is not something that is voluntarily given by the oppressor. It is something that must be demanded by the oppressed. Freedom is not some lavish dish that the power structure and the white forces in policy-making positions will voluntarily hand out on a silver platter while the Negro merely furnishes the appetite. If we are going to get equality, if we are going to get adequate wages, we are going to have to struggle for it. –Speech to the American Federation of State, County and Municipal Employees (AFSCME), Memphis,Tennessee, March 18, 1968

I have almost reached the regrettable conclusion that the Negro’s great stumbling block in his stride toward freedom is not the White Citizen’s Council-er or the Ku Klux Klann-er, but the white moderate, who is more devoted to “order” than to justice; who prefers a negative peace which is the absence of tension to a positive peace which is the presence of justice; who constantly says: “I agree with you in the goal you seek, but I cannot agree with your methods of direct action”; who paternalistically believes he can set the timetable for another man’s freedom; who lives by a mythical concept of time and who constantly advises the Negro to wait for a “more convenient season.” Shallow understanding from people of good will is more frustrating than absolute misunderstanding from people of ill will. Lukewarm acceptance is much more bewildering than outright rejection. –Letter from Birmingham Jail, 1963

And one day we must ask the question, ‘Why are there forty million poor people in America? And when you begin to ask that question, you are raising questions about the economic system, about a broader distribution of wealth.’ When you ask that question, you begin to question the capitalistic economy. And I’m simply saying that more and more, we’ve got to begin to ask questions about the whole society. –Speech to SCLC, Atlanta, Georgia, Aug. 16, 1967

…I’m sad to say to you tonight I’m absolutely convinced that the forces of ill will in our nation, the forces on the wrong side in our nation, the extreme righteous of our nation have often used time much more effectively than the forces of good will and it may well be that we may have to repent in this generation not merely for the vitriolic words of the bad people who will say bad things in a meeting like this or who will bomb a church in Birmingham, Alabama, but for the appalling silence and indifference of the good people who sit around and say wait on time. Somewhere we must come to see that human progress never rolls in on the wheels of inevitability, it comes through the tireless efforts and the persistent work of dedicated individuals who are willing to be co-workers with God and without this hard work time itself becomes an ally of the primitive forces of social stagnation. And so we must always help time and realize that the time is always right to do right. –“The Other America”, Grosse Pointe High School – March 14, 1968

…it is not enough for me to stand before you tonight and condemn riots. It would be morally irresponsible for me to do that without, at the same time, condemning the contingent, intolerable conditions that exist in our society. These conditions are the things that cause individuals to feel that they have no other alternative than to engage in violent rebellions to get attention. And I must say tonight that a riot is the language of the unheard. And what is it America has failed to hear? It has failed to hear that the plight of the negro poor has worsened over the last twelve or fifteen years. It has failed to hear that the promises of freedom and justice have not been met. And it has failed to hear that large segments of white society are more concerned about tranquility and the status quo than about justice and humanity. –“The Other America”, Grosse Pointe High School – March 14, 1968

The policymakers of the white society have caused the darkness; they create discrimination; they structured slums; and they perpetuate unemployment, ignorance and poverty. It is incontestable and deplorable that Negroes have committed crimes; but they are derivative crimes. They are born of the greater crimes of the white society. When we ask Negroes to abide by the law, let us also demand that the white man abide by law in the ghettos. Day-in and day-out he violates welfare laws to deprive the poor of their meager allotments; he flagrantly violates building codes and regulations; his police make a mockery of law; and he violates laws on equal employment and education and the provisions for civic services. The slums are the handiwork of a vicious system of the white society; Negroes live in them but do not make them any more than a prisoner makes a prison. Let us say boldly that if the violations of law by the white man in the slums over the years were calculated and compared with the law-breaking of a few days of riots, the hardened criminal would be the white man. These are often difficult things to say but I have come to see more and more that it is necessary to utter the truth in order to deal with the great problems that we face in our society. –Comments on Watts Rebellion, 1965

There is at the outset a very obvious and almost facile connection between the war in Vietnam and the struggle I and others have been waging in America. A few years ago there was a shining moment in that struggle. It seemed as if there was a real promise of hope for the poor, both Black and white, through the poverty program. There were experiments, hopes, new beginnings. Then came the buildup in Vietnam, and I watched this program broken and eviscerated as if it were some idle political plaything of a society gone mad on war. And I knew that America would never invest the necessary funds or energies in rehabilitation of its poor so long as adventures like Vietnam continued to draw men and skills and money like some demonic, destructive suction tube. So I was increasingly compelled to see the war as an enemy of the poor and attack it as such. –Beyond Vietnam, Address Delivered to the Clery and Laymen Concerned about Vietnam, Riverside Church, April 4, 1967

As I have walked among the desperate, rejected, and angry young men, I have told them that Molotov cocktails and rifles would not solve their problems. I have tried to offer them my deepest compassion while maintaining my conviction that social change comes most meaningfully through nonviolent action. But they asked me, and rightly so, “What about Vietnam?” They asked if our own national wasn’t using massive doses of violence to solve its problems, to bring about the changes it wanted. Their questions hit home, and I knew that I could never again raise my voice against the violence of the oppressed in the ghettos without having first spoken clearly to the greatest purveyor of violence in the world today: my own government. –Beyond Vietnam, Address Delivered to the Clery and Laymen Concerned about Vietnam, Riverside Church, April 4, 1967

I am convinced that if we are to get to the right side of the world revolution, we as a nation must undergo a radical revolution of values. We must rapidly begin the shift from a thing-oriented society to a person-oriented society. When machines and computers, profit motives and property rights, are considered more important than people, the giant triplets of racism, extreme materialism, and militarism are incapable of being conquered. –Beyond Vietnam, Address Delivered to the Clery and Laymen Concerned about Vietnam, Riverside Church, April 4, 1967

Secret Black Desi History: A website created by the Alliance of South Asians Taking Action illuminating the relationship between South Asian and Black liberation struggles is an excellent resource on this little known history.
At the River I Stand: A documentary following the 1968 Memphis sanitation workers strike and the
assassination of Martin Luther King, Jr., is a powerful illustration of the radical social and economic agenda of King’s Poor People’s Campaign.
Dr. Martin Luther King Jr.: “Beyond Vietnam”:  Teaching resources from the Zinn Education Project on King’s radical legacy.  This resource also contains a link to a great lesson plan for middle and high school students by Craig Gordon called, “Hidden in Plain Sight: Martin Luther King Jr.’s Radical Vision.”
“The Birth of a New Nation.” Sermon Delivered at Dexter Avenue Baptist Church, April 7, 1957: A speech by Martin Luther King, Jr., upon returning from a visit to Ghana in which he supports national liberation struggles.
Stokely Carmichael on Assassination of Martin Luther King Jr.: Black Power and Civil Rights leader Stokely Carmichael (Kwame Toure) on the repercussions of Martin Luther King’s Jr.’s assassination, which he describes as a declaration of war on Black people.
“The preacher and the Organizer—The Politics of Leadership in the Early Civil Rights Movement,” from Ella Baker and the Black Freedom Movement: A Radical Democratic Vision (2003) by Barbara Ransby, UNC Press, on the development of the Southern Christian Leadership Conference.
Martin Luther King, Jr.: Charismatic Leadership in a Mass Struggle, by Clayborne Carson
(1987) on problematizing the idea of King’s charismatic leadership.