The Victory of Resistance in El Salvador: 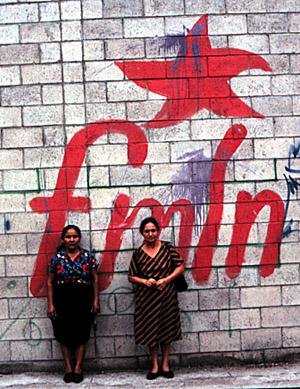 El Salvador has been resisting colonization and the intervention of imperialist forces for centuries.  The Frente Farabundo Martí para la Liberación Nacional (FMLN) became the country’s largest parliamentary party in last week’s elections, and is poised to win the presidential elections in March 2009.  These (possible) victories embody the ongoing resistance and a break with the “civil dictatorship” of 20 years of the U.S.-backed right-wing ARENA party.

In addition to the significance of this victory for El Salvador, a new FMLN government in the country will join with other leftist governments across Latin America in challenging U.S. hegemony and intervention across Central and South America.

The Committee in Solidarity with the People of El Salvador (CISPES) sent observers to the January elections in El Salvador to witness the democratic process and the people’s participation in that process, at the same time challenging unwanted U.S. intervention and right wing fraud.

Join us to hear about the recent history leading up to the current elections, the situation since the peace accords in 1992, and the results and analysis of the January elections.

Felix Salvador Kury, an immigrant from El Salvador, is currently the Director of the Cuba Educational Project with the College of Ethnic Studies at San Francisco State University.  Francesca Austin-Ochoa, coordinator of the Bay Area chapter of CISPES, recently returned from El Salvador.

The Center for Political Education: Resource for Social Movements and the Left