DEGREES OF VISIBILITY
A photo exhibition and opening program featuring photographs by Ashley Hunt interrogating the role of imprisonment in our physical and social environments.

IN THE DARK TIMES WILL THERE ALSO BE SINGING?
A block of programming curated for the 2017 San Francisco International Arts Festival.  The program included three panels of culture workers and organizers exploring issues including gentrification and displacement, borders and organizing in diaspora, and the relationship between culture work and movements for change. Featuring: Fernando Martí, Charmaine Davis, Nihar Bhatt, Eden Silva Jequinto, Ziad Abbas, Wael Buhaissy, Dohee Lee, Cat Brooks, and Armael Malinis.

FACING THE RIGHT: A CONVERSATION WITH TARSO RAMOS
A conversation with Tarso Ramos, executive director of Political Research Associates on the contemporary constellation of right wing forces within government and on the ground in the United States.

WITHOUT WALLS: ABOLITION AND RETHINKING EDUCATION
A panel discussion with K-12 educators and abolitionist organizers exploring the intersections between prison industrial complex

VISUALIZING REVOLUTION: CREATING VISUAL CULTURE IN A TIME OF DESTRUCTION

A presentation by Melanie Cervantes of Dignidad Rebelde, about the role of graphics and visual language in making revolution beautiful, irresistible, and achievable. 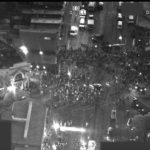 a workshop to help activists identify and monitor surveillance tactics used by law enforcement during large-scale mobilizations, facilitated by members of the Stop LAPD Spying Coalition.  Held as part of the Bay Resistance Mass Meeting and Training.
WHO’S GOT THE POWER?
A WORKSHOP FOR ORGANIZERS ON ANALYZING THE BALANCE OF FORCES

a workshop offering a methodology for

analyzing the relationship between forces of repression—social, economic, political—and those in resistance to them.  Facilitated by Rebecca Gordon of University of San Francisco Department of Philosophy, and co-founder of the War Times/Tiempo de Guerras collective.

People Get Ready: Building Resistance in the Trump Era
A one-day conference on analysis, strategy, and resistance after the 2016 election.

Repression and Resistance: Looking Back, Bracing for the