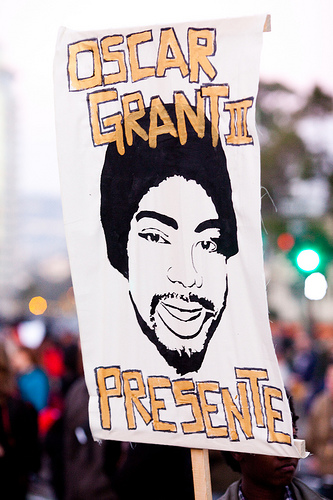 On March 21st four Oakland Police Department officers were allegedly killed by Lovelle Mixon who was subsequently shot to death.  In the days that followed, numerous accusations emerged about this young man’s past and there was an upsurge in support for the OPD while the trial of the officer who shot Oscar Grant was seemingly put on hold. What impacts will this have on Oscar Grant’s case, the City of Oakland, and criminal and juvenile justice organizing? How do we respond to this upsurge as leftists?

Organizer Malachi Garza will lead our next Third Thursday discussion on the murder of Oscar Grant, related organizing efforts and the effects of the March 21st OPD deaths.

Malachi Garza is currently on staff at the Community Justice Network for Youth (CJNY) a U.S. based network of 160+ organizations working to stop the rail to jail, with a particular focus on the over incarceration of youth of color.  CJNY is a founding member of Coalition Against Police Brutality, a coalition of individuals and organizations dedicated to mass mobilization, strategy research and public education regarding the recent murder of Oscar Grant and the trial of the former BART police officer Johannes Mehserle.